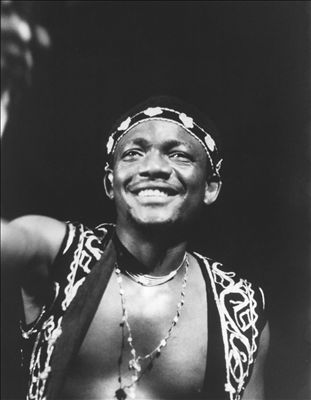 Sonny Okosun (January 1, 1947 [1] – May 24, 2008 in Washington DC) was a musician from Nigeria. He is best known as the leader of the Ozzidi band. A native of Edo State in southern Nigeria and of Esan heritage. He named his band Ozziddi after a renowned Ijaw river god but to Okosun, the meaning was there is a message. His surname is sometimes spelled Okosuns and his first name Sunny. He was one of the leading Nigerian musicians from the late 1970s to mid-1980s.[2]

Okosun’s brand of African pop music, Ozzidi is a synthesis of Afro-beat, Reggae and funk music.[3] From 1977, he became known for protest songs about Pan-Africanism, freedom and a few other social and political issues affecting Africans.

As a young boy, Okosun spent his early childhood with his grandmother at Obore, near Irrua in Edo State, thereafter, he moved to Enugu to live with his parents. In Enugu, his father worked with the Nigerian Railway Corporation.[3] Okosun attended various training schools starting with St Brigid’s School, Asata Enugu and he then enrolled at a government trade center in Enugu. He left the training center before completing his studies.[3] Excited by a career in entertainment, Okosun traveled to Lagos to further his interest in acting. In Lagos, he took drama lessons at school in Surulere, Lagos but he left the school after a few months and returned to Enugu. In Enugu, he found opportunity in small roles where he participated in a few dramatic productions; he also worked with a notable Enugu drama studies teacher, professor John Okwerri.[3] His participation in Okwerri’s group and his determination to succeed in entertainment led him to be featured in some radio and TV skits with the Eastern Nigeria Television Station.

Okwerri was a member of the Mbari center in Enugu, the Mbari movement started by Ulli Beier, had J.P. Clark and Wole Soyinka as members and was a meeting spot for various artists and writers. It was at the center he began to develop an interest in a career in music[4] and also his recurrent appearances at the Eastern regional television station gained him notice from Mariam Okagbue who bought him a guitar and encouraged him to continue working on music. In 1965, he was a participant in a drama group that won the first prize in a competition, the group’s winning play was a dramatic version of J.P. Clark’s Song of a Goat and Okwerri’s Masquerades.[3] As the winning group they represented Nigeria in the 1965 Commonwealth Arts Festival held in London. When he returned, Okosun joined the cast of Ukonu’s club, an Eastern Nigeria Television variety show where he was able to showcase his guitar playing abilities.[5]

In 1966, he joined the band, the Postmen.[3] as a rhythm guitarist.[5] The band played the music of Cliff Richard, Elvis and the Beatles.[6]

At the onset of the civil war, Okosun and his family who were from the Mid-West and not from Eastern Nigeria had to flee the region and move to Lagos. In Lagos, he worked as a stagehand for a television station and jammed with a number of groups. In 1969, he found steady work as a second guitarist in Victor Uwaifo‘s Maestroes. Uwaifo still riding on his hit, Joromi took his band to a tour in Japan and Europe.[7] While, he was with Uwaifo, he honed his skills in musical composition by learning African rhythms styles and experimenting with a fusion of African and rock rhythms.[5]

From 1972 to 1974, he led a band that was originally called Paperback Limited but later regrouped as Ozziddi.[8] Prior to regrouping as Ozziddi, he and some members of his group teamed with Fela and his group, the Kooler Lobitos to play gigs in the Yaba area of Lagos. On forming Ozziddi, he released several albums either with Ozziddi band or as a solo artist.[8] The albums included, Ozzidi, Living Music and Ozzidi for Sale. His early Ozzidi sound combined the highlife roots of his Edo heritage with a touch of guitar riffs[9]

He had his first break with the single, Help which sold close to hundred thousand copies in Nigeria.[10] The lineup of Ozziddi band was headed by Okosun as lead vocalist, supported by three backup dancers, a trombone player, keyboardist, bass and trap drums.

Towards the late 1970s, Okosun began to release a string of reggae infused Afro-pop music.[11] His 1977 song “Fire in Soweto” became a major international hit[8] and his first gold album. [3] He was featured on the anti-apartheid album Sun City, and his song “Highlife” was on the soundtrack of the 1986 film Something Wild.[2] He released another LP album, Power to the People followed with a tour in some Nigerian cities.

He released his first American album in 1984 under Shanachie Records.[12] His next American record, Which Way Nigeria was released in 1985 under the EMI label in Nigeria and licensed to Jive records for international promotions.[13]

His mainstream success started to fade in the late 1980s, but he continued his career as a gospel musician under the name Evangelist Sonny Okosun.[8]

By 1993, Okosun had started moving towards gospel music, he released the gospel album Songs of Praise followed by another gospel piece tagged Revival. In 1998, he started the House of Prayer Ministry, a Christian church.

He died aged 61 of colon cancer on 24 May 2008 at Howard University Hospital, Washington DC.[14] His musical styles included reggae, highlife, Afro-funk, and gospel, among others.[8] He made music in a number of languages, including Esan, Igbo, Yoruba, Hausa, and English.[15]